Some people are born as enlightened beings, they say.
Really? How come? Can’t be – is the response of someone rational, someone who believes in a higher consciousness perhaps, but is unable to accept it as being present in a human being. I was guilty of the same skepticism, until this afternoon.

I was invited to conduct a book launch ceremony. I was thrilled for many reasons. For one, the publisher, Wisdom Village, is like family, two, the book was on Lal Bahadur Shastri, an exponent of dignity and honour in Indian polity and the authors were none other than the legend’s son, Anil Shastri and my teacher & mentor for many years, Pavan Choudary. Ordinarily, this would have been just another book launch. But when His Holiness the Dalai Lama consented to launch the book, the scale of the event changed dramatically. As the master of ceremonies, I had been reading and collating my notes on the authors, the publisher, the book and His Holiness. Thanks to the information age, a lot was available online, it was like a divinity broadcast complete with an itinerary, a history and profile. I compiled my script and knew that the right protocols were imperative. But is it only about protocols and procedure?

The event started with the timely arrival of His Holiness and lighting of the lamp. My script was sharp, the speakers were thorough and the short film played without buffering. The photographer went click-click and I was keeping a tab on the tick-tock. As per schedule, His Holiness was invited to address the gathering that was so much more than the capacity of the hall. 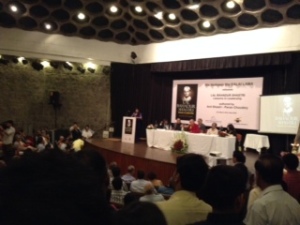 I was expecting a discourse; I’m sure some were expecting a somber sermon. But what’s this – everyone was laughing! The enlightened one in orange robes seemed to love humour! He was sharing how Shastriji’s mind was so much bigger than his lean body! He himself laughed with effervescent vivacity. I watched in awe and wondered at the light-hearted and free flowing persona of this majestic being. Exemplifying and embodying peace leading to progress, one could see that His Holiness the Dalai Lama was more present to people than to protocol and procedure.

One could not seem to get enough of this witty Buddha. The youthful spirit of this 78 year old was shining across the hall. And as the event came to a closure, he got up to bless the people on the dias, in true Tibetan tradition – offering a white scarf (kata) around their neck. I stood at the podium witnessing the beautiful gesture; only to find him walking towards me with a kata. Without missing a moment, I moved forward, touched his feet and he placed the scarf around my neck. The silky white touched my hair, my arms and something deeper. There was stillness in that moment. There was contentment. There was an overwhelming wave of internal emotion and eternal gratitude that suddenly took over. I opened my eyes. He was heading towards the exit and I quickly resumed my position at the podium asking everyone to rise as His Holiness the Dalai Lama exits the hall. But did He?

Charushilla is an evolving educator who founded her unique mentoring initiative, University Connection from her living room! Over the years, having mentored thousands of students, she's grown into an authority in edupreneurship, college planning, communication consulting, scholarships and into a high performance coach for young minds! She believes that career decisions are life decisions and works with students, parents, young professionals to aim for more. View more posts